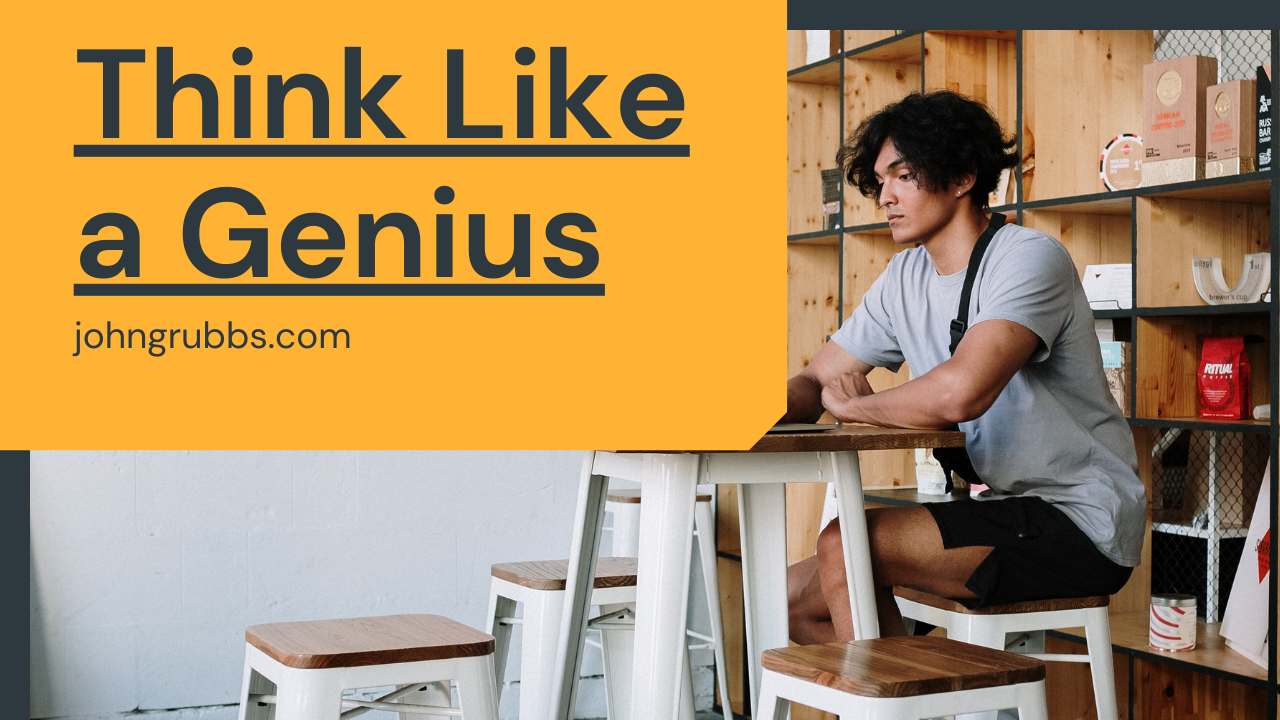 I have been pondering the question about genius thinking.  Are some people considered to be geniuses, or do people attain genius-level thinking?  In other words, is genius thinking a genetic gift, or is genius a level of thinking we can achieve?  If it is something to attain, how do we sustain that level of thinking?  Let us dig into these questions and get our minds dirty.

Merriam-Webster offers some insight.  The definitions of genius (plural genii) are an attendant spirit of a person or place.  A person who influences another (good or bad) can be accused of being his brother's evil genius.  It is a strong leaning or inclination; a peculiar, distinctive, or identifying character or spirit.  For example, consider the genius of our democratic republic government.  Also, genius is a single strongly marked capacity or aptitude; extraordinary intellectual power, especially as manifested in creative activity.  And finally, it is a person endowed with exceptional mental superiority, a person with a very high IQ.

Genius can be an influence, idea, or ability.  Now we are getting somewhere. Let's start with the latter.  You can attain genius-level thinking.  The duration of that high level of thinking is variable.  In other words, genius-level is unsustainable.  It is not constant.  People with higher IQs seem to sustain it longer than most.  Albert Einstein must have done some bone-headed things during his lifetime.

Genius as an idea is fascinating.  If we all contribute to the mental ether, this means genius-level ideas can be all around us.  The energy required to conceptualize the electric lightbulb probably did not start in Edison's brain.  It is more likely that something external sparked his brain to conceptualize the incandescent bulb.  To think like a genius, inputs (ideas) must energize our brains.  Logically, our founding fathers contributed many thoughts to the idea that became our country.  The idea was independent of one person's brain and formed by the collective input of many.

Finally, genius as an influence is the impact our environment has on our thinking.  Steve Wozniak's effect on Steve Jobs resulted in the company known as Apple.  While Jobs gets most of the credit, Wozniak was the influence that made the products possible.  This thinking means our environment (in the form of people) can help us reach the level of genius.  You are the average of the ten people closest to you.  Choose those ten people wisely!

We now know "what" it takes to be a genius.  It is time to consider "how" to think like a genius.  Genius thinkers are always looking to improve themselves and the surrounding things.  They constantly search for opportunities to make things better.  Henry Ford was relentless about automobile travel.  Elon Musk is determined t make electric vehicles for the masses.  The innate need is to make something better regardless of what the people around them say.  They are more interested in ideas than people.  When popular thinking considers something impossible, they figure out a way to do it anyway.

Next, genius thinkers enjoy thinking and learning.  While most people hate to consume mental calories thinking, genius thinkers are the opposite.  They love to process complex ideas for solutions to the problems inside their brain.  Consider the story of the squirrel-proof bird feeder.  An engineer is at the hardware store looking for parts to build a birdhouse on the weekend.  The store clerk has seen him in the store many times and asks him about his project.  The engineer tells the clerk he is making a squirrel-proof bird feeder because the squirrels keep getting his bird feed no matter what he tries.  The clerk says good luck with that.  The engineer replies, what do you mean?  The clerk asks the engineer how many hours a week he spends thinking about the bird feeder?  The engineer says about six hours. The clerk tells the engineer that the squirrel is spending every waking hour of his life thinking about the bird feeder.  In this story, the squirrel is like a genius.

To think like a genius, you must control your emotions.  When asked about failing ten thousand times to make a light bulb, Edison replied he didn't fail ten thousand times, and he learned ten thousand ways not to make a light bulb.  He was able to overcome the emotion of repeated failure until he achieved genius-level thinking.  Emotions distract deep-level thinking and cloud the mind with inputs that mitigate higher forms of concentration.  Imagine solving a complicated calculus problem while angry, and you get the point.

Geniuses love to learn.  They are lifelong learners.  They are more passionate about what they do not know than proud of what they do know.  Constantly adding knowledge becomes a way of life on the path toward discovery.  Genius thinkers can connect what might be called disparate information in a way that others simply cannot.  Steve Jobs saw the mobile phone as the central hub in our lives before we did.  The smartphone with applications combines our love for photography, music, and social media with an almost endless supply of apps to translate language, get food, and listen to books.  That is genius!

The most notable characteristic of genius thinkers is the ability to change orthodoxy.  Orthodoxy is a belief or a way of thinking accepted as true or correct.  If your brain is locked, new ideas cannot penetrate your thinking.  The open mind of the genius requires consideration and reconsideration.  This open mind gives them new and often strange perspectives on the same reality.  They look at the birds above and believe a man can do the same thing.  Man can live happily on Mars.  Crazy or genius, you be the judge.

Finally, the most effective way to think like a genius is simple.  To feel like a genius, join a mastermind group.  The term,  was coined by Napoleon Hill, author of Think and Grow Rich. Hill defined the "Master Mind" as a "coordination of knowledge and effort, in a spirit of harmony, between two or more people, for the attainment of a definite purpose." In his research, Hill had surveyed hundreds of the most successful people in the world. Hill's many conversations with Andrew Carnegie inspired the Master Mind concept. Notably, Carnegie attributed his entire fortune and success to his mastermind group.

According to the Growthink, a mastermind group of writers and poets included CS Lewis, JRR Tolkien, Charles Williams, and Owen Barfield. Two classic works of literature emerged from this group: The Chronicles of Narnia and The Lord of the Rings. President Theodore Roosevelt started a mastermind group during his presidency. Roosevelt was only 42 years old when he became president (the youngest age ever for an American president). He needed help working with many other politicians who were much older than he and turned to his mastermind group to support and help.  Another historical mastermind group was called "The Vagabonds." It included Henry Ford, Thomas Edison, President Warren G. Harding, and Harvey Firestone (founder of the Firestone Tire and Rubber Company).

These people are geniuses to many.  They are historical heroes to others. The question for consideration is whether we would even know these names today had it not been for the mastermind groups.  I believe we can all attain some level of genius when we aspire to think better.  I will leave you with one last thought.  My seventeen-year-old training business evaporated during the 2020 pandemic.  With my mastermind group at my side, I pivoted and have become stronger and more successful.  Is that genius?  I will allow you to be the judge.