Do One Thing to Improve as a Leader 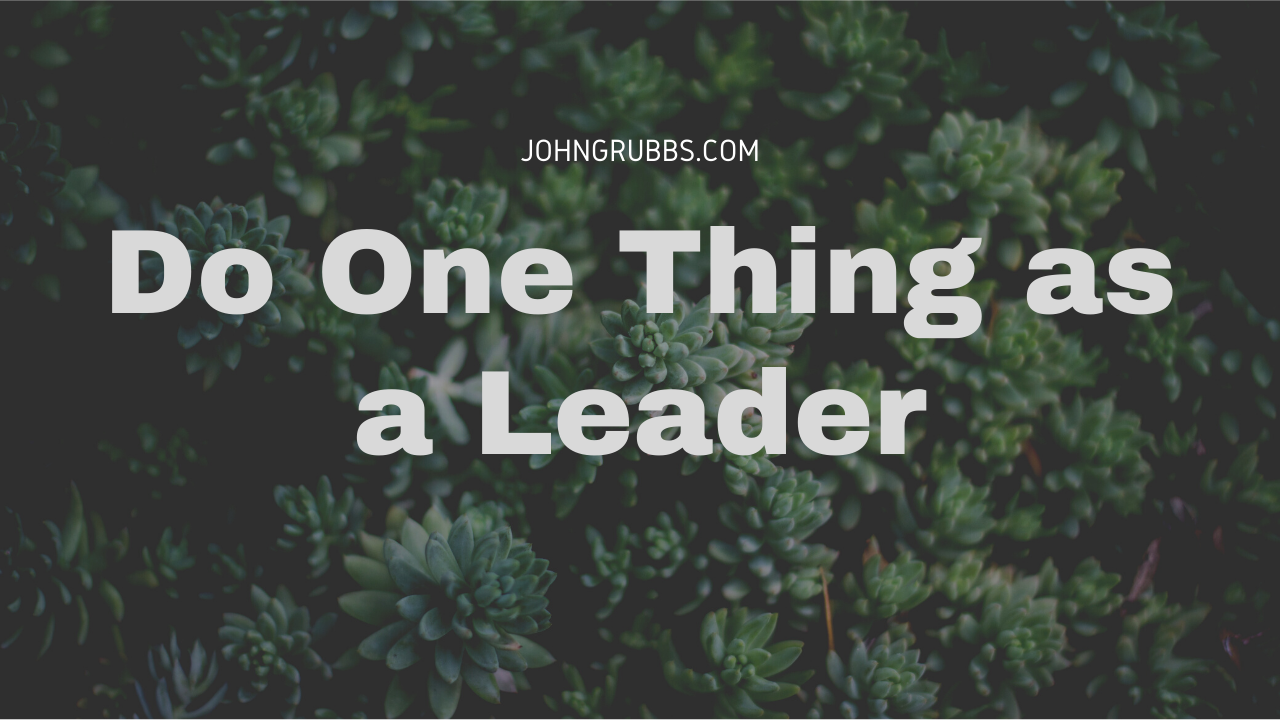 A lack of awareness is common when it comes to the perceptions of your followers.  Do they see you as a leader?  This insightful question determines your location on the scale between manager and leader.  You can be the boss and not have followers.  In other words, people can do what you expect and still not consider you as their leader.  Having worked with thousands of supervisors, managers, and executives for over two decades, I have seen one thing move the needle the most when becoming the leader among followers.  This one thing seems to be consistent yet elusive to many on the journey toward the leader.

People falsely consider traits as the primary driver of leadership.  While important, qualities like accountability and adaptability are not what make you the leader to most followers.  Confidence and creativity are also traits that make someone desirable, but not necessarily the leader.  While positive leadership traits exist, they often create the illusion of leadership.  They are the table stakes in the form of expectations from your followers.  They expect specific positive characteristics to be present.  Following are some negative traits that do prevent someone from attaining the position of leadership from the team:

At this point, you should sense something is missing.  The one thing is not entirely clear.  It is not about your style or your desire to become a leader.  The one thing that consistently separates leaders from the herd is simple to conceptualize yet tricky to execute.  If you want to be a leader, become relentless about follow-through.  Do not confuse follow-through with follow-up.  Follow-through means you press on in an activity or process to a conclusion.  Instead of starting and stopping over and over, you press on towards an outcome or goal.  When everyone else is ready to give up or start over, you keep pushing the team through difficulty.  It is about meeting resistance and moving through the temptation to retreat or give up.

In the early part of the last century, Henry Ford’s engineers told him it was impossible to cast an entire engine from one block of metal.  He insisted they keep trying until they determined how to accomplish the task.  Months later, they told him it was impossible again.  He insisted they keep working to make it happen.  After more months of failure, they finally determined how to accomplish the impossible-they succeeded.  In sports, the secret to becoming a leader is your ability to follow through until the desired outcome occurs.

When you become relentless about a goal or outcome, people begin to believe in the vision.  Visionaries like Elon Musk and Jeff Bezos pushed through many opportunities to stop and retreat.  The battle to see a challenging project through is often decided before it gets started.  Quitting is a bad habit that many aspiring leaders are afflicted with today.  When resistance appears, they lack the desire or confidence to push through, and the followers are always watching.

Whether you believe you can or you cannot, you are correct.  -Henry Ford

How many initiatives have you started and stopped in your business?  Your people are always watching and judging your actions.  They learn to resist your desire for change, and you reward them with quitting again and again.  Like drug-resistant bacteria, your team is a product of your creation.  They reflect the behavior you model as the leader.  Once the newness wears off an initiative, the complex work begins.  People get bored and quietly seek a return to normalcy.  The affliction of status quo bias takes over, and you slowly quit over time.

Pushing through the temptation to quit and maintain follow-through on your goals and commitments has the opposite effect.  When your people observe your resolve about something, they eventually buy in or get out of the way.  Your determination becomes an inspiration, and you start to earn the title of leader.  People respect your consistency and start believing in your vision, but this takes time.  I see leaders quit just before the point of achieving success.  They were almost there, and they stopped.  It is tragic.

Remember this reality if you are in the middle of a problematic initiative or about to embark on one.  You will experience resistance from the team.  If you are not currently experiencing resistance from the group, you are not the leader.  You are merely allowing them to remain in their comfort zones.  You are not leading your troops into a battle for the change you know the business needs.  You will never defeat the status quo without a fight from this invisible enemy.

Change is the pay-off from hard-fought battles in the world of business.  Knowing change is necessary is not enough.  You must be willing to endure the fight and suffer some casualties along the way.  Following through to accomplish something remarkable is what makes you a leader.  You believe while others question.  You leap while others remain still.  You become relentless at each battle you fight along the way.  They will doubt you until they admire you.